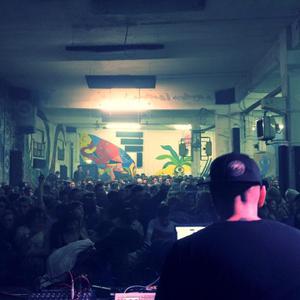 Maskk starts in the “Illegal rave scene” around mid ’90 in Rome. The arrival of various tribes in Italy was what brought him closer to the Teknivals and Rave circuit. The step from been a raver to be a Dj didn’t last long as he then soon started mixing records. In 1998 he is one of the founders of the sound “against” system called Kernel Panik, which it is what will bring him to travel and play all across Europe. Following this, his music takes him to the South American continent, precisely in Argentina and Brasil. Maskk infact, will departs in 2006 with KERNEL PANIK for the epic SOUTH SIDE MISSION which lasted until 2008 and took them around the latin continent organizing festivals and free parties.Soon after, along with mixing records, he starts to play live-sets. His firsts productions, even done on magnetic tapes,(dj set) which are basically music-tapes are dated around the year 2000. Afterwards he will move onto CD-R to then arrive to play his live set and produce his music on many vinyls from 2004, most of them produced by the same Kernel Panik,Hydrophonic records, AUDIOTRIX label with the various works together with Ix-Indamix and made a live productions project with her called DONT PANIK. In the last years he has been playing in many different places, from big rave parties, big festivals, many Socials centers and squats around all the peninsula, to then arrive to play every week in clubs/disco and festivals of many european cities. Not to forget his presence, as a music maker and DJ, to the huge and famous Glastonbury Festival in UK (2010).